TowerFall is probably the closest experience I have found to Smash Bros on any console. The action and game matches are far faster paced though. Each match is over in a matter of minutes. The speed of the matches is primarily due to that each archer can take only a single shot from an arrow or being jumped on by an opponent before dying. The game is built for 2-4 players but there are training arenas available which are single player. The goal of which is to beat your time in shooting targets. 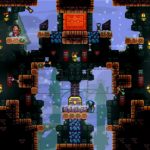 The physics of the game are quite fun. When shooting arrows, they can interact with other objects in the arena such as sconces and even other arrows. If you time your arrows just right, you can shoot another player’s arrow out of the air. Additionally, there are several Pac-man style openings on the edges of the arenas that allow you to go from the floor to the ceiling or from wall to wall. In some arenas it is possible to lob an arrow through the floor opening and watch as it continually falls through the floor and reappear from the ceiling and form a deadly trap for anyone seeking to cross.

There are several gameplay modes possible, with two being made available for free. The two free modes are deathmatch and last man standing. In deathmatch, the goal is to rack up as many kills per match as possible and the winner is the person who reaches the designated number of kills first. In last man standing, the goal is to be the last player left alive at the end of each match. Deathmatch battles tend to go a lot quicker than last man standing battles, and if you are playing two player, there is little different between them. The game also teases a team deathmatch mode if you are willing to pay.

In each arena, there are a number of perils and power ups awaiting you. Treasure chests drop and contain either a power up or an area affect. The available power ups are extra arrows, a shield that lets you take an extra hit and wings that allow you to fly around the arena. Area affects available are a disorienting effect which distorts and slows the battles, lava replacing the walls, floors and ceilings, and turning out the lights. Each one adds an extra challenge to surviving the battle.

There are other power ups teased in the training modes that would add a lot of fun to the game after paying. Each battle arena has access to a unique type of arrow. For instance, one arena introduces an exploding arrow which can kill multiple targets at once as well as clear blocks from the arena. Another arena introduces briar arrows which when landing sprout deadly thorns. You get a sampling of each of these in the training arena, but to fully realize the fun to be had with them, you will have to pay.

If there is one downside to TowerFall, it would have to be the nag screen. After each match, the game shows  tip and then follows it with a nag screen asking you to buy. The screen itself wouldn’t be so bad if it didn’t force you to wait 12 seconds before being allowed to skip it. This is a minor gripe, admittedly, but something that just bugs me. I wouldn’t let it get in the way of buying such a great game though.

Which brings me to the final bit of info. TowerFall is one of the more expensive single purchase games on the Ouya, coming in at $14.99. So far there has been only one other game that costs more than that, Final Fantasy 3. While that price may seem steep, it is a steal compared to the $50-60 one might spend on some other console games for a fraction of the fun you will have with this. I think it is very worth the price. Even if you aren’t willing to pay that right away, the free portion is enough to give you hours of fun.

But if you are looking for that one great game. That one game you see yourself playing for hours upon hours, then TowerFall is probably it. You won’t find a better multiplayer experience anywhere on the Ouya and I have not seen a game as fun as this one on any other system. This is certainly that killer game.

What you get for free: Access To the first battle arena, several training arenas and most battle modes.

What you unlock for paying: All battle arenas, training arenas and gameplay modes.