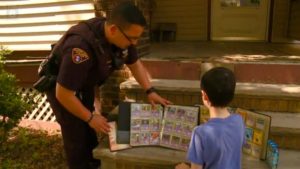 Bryce’s mom called the cops.  James Grotenrath was one of the of the Cleveland police officers who showed up to investigate and he felt so bad for Bryce’s loss that he went home, dug his own Pokemon collection out of his closet and gifted them to the bereft youngster.

“I grew up with Pokemon, I loved Pokemon as a kid and I would be heartbroken too if my cards were taken from me,” Grotenrath said.

Puts a smile on your face, doesn’t it?

Well here’s the weird part.  Sweet and thoughtful as it was, Grotenrath’s donation may have been unnecessary, or at the very least overkill, because according to the news report I sourced this story from, the police found the kid who stole Bryce’s collection a few blocks away and recovered his binder along with at least some of his cards.  How many cards is “some” of his cards?  How big was Bryce’s collection in the first place?  Did Grotenrath donate his collection before the binder was found or after?  What did the thief do with the cards that were missing?  I don’t know.  The report only says “some of Bryce’s cards were missing” and leaves it at that.

No charges were filed against the older boy but apparently he did get a “talking to.”