We have opinions on Activision, Disney and Nintendo.  Come hear them, won’t you?

26:49 – Lack of industry standards? Nah, we think Activision was just too lazy to put subtitles in Spyro’s new pre-rendered cut-scenes

49:37 – Why did Nintendo publish a video explaining how to prepare your Switch for trade-in or sale?

31:06 – The physical release of the Spyro trilogy only includes the first game

Molehill Mountain Episode 95 – Do I Look Like I’m Made of Cardboard?

Cardboard is expensive, yo!

Molehill Mountain Episode 73 – The Fault In Our Star Wars

Star Wars is going to make more Star Wars to go with our Star Wars!

31:13 – EA buys Respawn. Will probably kill it like all the others

51:30 – Take-Two and Ubisoft have some very interesting pet names for microtranactions and DLC

57:45 – After a decade and a half, Humvee takes it to Activision for using its product in Call of Duty

EA has closed one of its studios… again.

Another week, another show where Zachary and Andrew go over an hour because they get caught up reminiscing about the cartoons of their youth.

Incorrigible, the both of them!

Zachary is off next week but we may have a special guest filling in for him.  See you Saturday!

27:34 – Andrew doesn’t care about console internet browsers. Do you?

33:27 – Activision won’t be releasing a new Skylanders game this year

45:18 – GameStop is getting the stink eye from gamers over its Circle of Life program

1:00:07 – An R-rated Castlevania animated series is coming to Netflix

1:05:55 – Zachary and Andrew geek out about a bunch of old cartoons 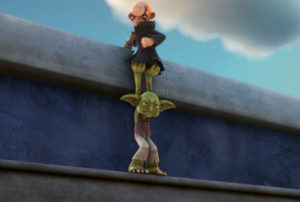 On this week’s show (episode 166) hosts Andrew Eisen and E. Zachary Knight are joined by Danny Ledonne – the creator of Super Columbine Massacre RPG!, about his ten year-old game, the documentary he made about it called “Playing Columbine” and why he currently finds himself banned from the Adams State University (ASU) campus (1:35 is the starting point). They also discuss the latest GamePolitics poll (“Is $5.9 billion to acquire King – developer of Candy Crush – a good move for Activision?” – 59:05). At the end of the show (1:19:53) Andrew and Zachary talk about Nintendo Direct, Super Smash Bros. characters and Xenoblade Chronicles X censorship.

If you missed Saturday’s live broadcast of Super Podcast Action Committee (Episode 124), you can watch the video replay onYouTube, or download it below. On…