33:09 – Bethesda advertised a nice canvas bag for its Collector’s Edition of Fallout 76 but sent gamers a cheap nylon bag instead

46:05 – The ESA makes an absurd, lie-filled statement about Loot Boxes

END_OF_DOCUMENT_TOKEN_TO_BE_REPLACED

46:30 – Famitsu poll: What to westerners like about Japanese games? Boobs!

1:06:33 – WB walks back loot boxes over half a year after it releases Shadow of War. Appears to want a cookie

END_OF_DOCUMENT_TOKEN_TO_BE_REPLACED

28:38 – Game developer uses malware as DRM. It goes about as well as you’d expect.

41:34 – ESA doesn’t want you to enjoy anything it can’t make money off of, bemoans it sees no revenue from admission fees of museums displaying video games that have long since been end-of-life’d.

END_OF_DOCUMENT_TOKEN_TO_BE_REPLACED

On this week’s show, EZK and Andrew continue to Kick the Bucket List (12:38), discuss the ESA’s public E3 event being held down the street from the main show (31:46), try to figure out the chronology of events surrounding a Cleveland police officer donating his Pokemon collection to a boy whose own was stolen collection was recovered (40:19), and spend a ton of time debating super-important questions like: “Should ‘fun’ be the baseline descriptor for games?” “Should games be called ‘games’ or something else?” “How do you define ‘video game’?” (46:06).

END_OF_DOCUMENT_TOKEN_TO_BE_REPLACED

For a reporter, covering the goings-on at E3, the annual video game trade show put on by the Entertainment Software Association, is a massive pain in the ass exacerbated by the fact that a good chunk of the people you’re wading through to get to the person you’re supposed to interview or the game demo you’re supposed to attend are not a part of the industry and have no business being there in the first place.

Yes, every year gamers who are excited about what’s new in the gaming world but are not a part of the video game industry manage to weasel their way into the event and get in the way of those of us there to work (and, let’s be honest, fan boy and fan girl out at all the exciting gaming goodness).

For years, people have floated the idea of opening up one of the event’s days to the public.  Well, this year, the ESA has taken a slightly different approach. END_OF_DOCUMENT_TOKEN_TO_BE_REPLACED 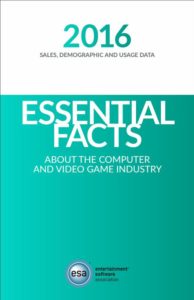 The demographic data in the annual report is compiled from a survey of over 4000 American households conducted by market research company Ipsos MediaCT for the ESA.  You can read the report and devour all of its numbery goodness at your leisure but here’s the data I found most interesting: END_OF_DOCUMENT_TOKEN_TO_BE_REPLACED

If you missed Saturday’s live broadcast of Super Podcast Action Committee (Episode 138), you can watch the video replay on YouTube, to your left, or download it below. On this week’s show hosts Andrew Eisen and E. Zachary Knight discuss the latest GamePolitics poll (“Did Oblivion handle the Pillars of Eternity epitaph as you would have?” – 20:18 mark), the ESA’s thoughts on hacking and DMCA exceptions (43:50), New Jersey’s proposed penalty increases for swatting (59:19), Paula Deen’s game possible copyright infringement (1:09:22), and Vivian James (and GamerGate) appearing in Afterlife Empire (1:22:19).

SuperPAC Episode 138 (138 MB – the show was live so it is made available in its raw, unedited format).

On this week’s show hosts Andrew Eisen and E. Zachary Knight discuss the latest poll on GamePolitics (how do you divvy up your Humble Bundle payments), FCC Chairman Tom Wheeler and net neutrality, the ‘New Essential Facts on Video Game Industry’ report from the ESA, China’s restrictions on game content released in the country, and the horrible story of a Call of Duty player who called a SWAT team on an opponent. Download Episode 96 now: SuperPAC Episode 96 (1 hour, 14 minutes) 85 MB.

As always, you can subscribe to the show on iTunes and use our RSS Feed to add the show to your favorite news reader. You can also find us on Facebook, on Twitter @SuperPACPodcast andGoogle +. You can send us feedback on the show by dropping a note tosuperpacpodcast@gmail.com.

Credits: The Super Podcast Action Committee is hosted by E. Zachary Knight and Andrew Eisen, and produced by James Fudge. The show is edited by Jose Betancourt. Music in the show includes “Albino” by Brian Boyko and “Barroom Ballet” by Kevin MacLeod. Both are in the public domainand free to use. ECA bumper created by Andrew Eisen.

Over the last few weeks, the Video Game Voters Network, the astroturf group set up by its parent the Entertainment Software Association, has been touting that it has over 500,000 members. While this number may sound really impressive on the surface, it doesn’t really hold up to reality. Take this graphic it just posted to Twitter: 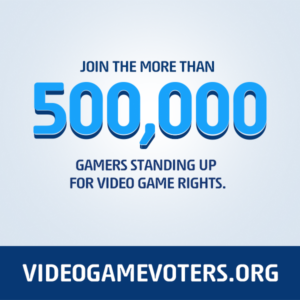 500,000 members is a lot but are there really that many? Are they really active and engaged in the work of the VGVN? To answer this, let’s first take a look at what it takes to become a member of the VGVN. Here is its sign up form:

If you don’t notice something wrong up front, let me explain. To become a member of the VGVN all one has to do is fill in an email and a zip and you are done. No further steps, nothing. Pretty simple. With such a simple method to become a member, then what is to stop a lot of people from joining. There is no risk, no effort. With such a simple form, how do they prevent people from signing up multiple times? With this form, I could sign up with all 8 of my current email addresses (yes I have 8, probably more) and I would count as 8 members. So how do they account for that possibility?

If the process of signing up is so simple, what incentive is there to drop out of the organization? Is there even a way to do that? Does the VGVN have any way to measure engagement in the organization outside of those who simply sign up? Not as far as I can tell. With no meaningful method of establishing activity in the organization, what is the point of touting this number? It would seem that this is merely a smokescreen to make it sound like this organization is worthwhile and effective, when it may very well not be.

But aside from the questionable nature of the membership numbers, the primary concern we should be considering here is how much weight these “500,000 gamers” have in the overall direction of the organization. As I mentioned in the opening, the VGVN is owned by the ESA, the largest lobbying organization for game publishers. What happens when the interests of the gamers represented by the VGVN clash with the interests of the publishers represented by the ESA? Look no further than last year’s Stop Online Piracy Act debate.

For many months, the ESA openly claimed support of SOPA. They claimed it was necessary to protect their members’ interests and profits from online piracy. However, many consumer groups opposed the legislation as it would have had severe unintended consequences for free speech online. Many consumer organizations were in opposition of SOPA except the VGVN. Throughout the whole debate and the site blackouts all over the internet, the VGVN never once spoke up in support of its members. It never once said a single thing in regards to SOPA. Despite many attempts to contact someone at the VGVN, I never once heard back from them. This event showed that those 500,000 members it claims to represent don’t matter when the interests of its publisher controlled master clash.

So what should you do if you are a “member” of the VGVN? That’s up to you ultimately. However, my suggestion is to unsubscribe. I have no idea if that will delete you completely and you will no longer be counted when it touts its numbers, but at least it sends some kind of message. My other suggestion is to join a gamer organization that actually cares about you. One that is independent of any corporate masters. A group like the Entertainment Consumers Association. (disclaimer, I am a member and work with them over at Game Politics as well as other aspects) This group has done wonders over the years to protect the rights and interests of gamers. Yes it costs money to be a member and to stay a member, but the benefits you get in return far outweigh the costs.

Don’t be fooled by big numbers like those touted by the VGVN. Those are mere distractions from what really matters, its record. What does it really stand for and who is it really speaking up for. That is what matters in the end. If it is not 100% on your side, then you should not be on its side.

On this week’s show we talk about Congressman Frank Wolf’s hearing this week to slam video game violence, changes being made to the ESRB, the ESA’s plan for a PSA campaign, the latest SimCity news, and the results of the latest GamePolitics poll. Download Episode 45 now: SuperPAC Episode 45 (1 hour, 12 minutes) 66.6 MB.