28:38 – Game developer uses malware as DRM. It goes about as well as you’d expect.

41:34 – ESA doesn’t want you to enjoy anything it can’t make money off of, bemoans it sees no revenue from admission fees of museums displaying video games that have long since been end-of-life’d.

END_OF_DOCUMENT_TOKEN_TO_BE_REPLACED

40:01 – Andrew is a Rampage fanboy and is annoyed by the trailer for the upcoming film adaptation

51:06 – EA removes microtransactions for Star Wars Battlefront 2 launch, will put them back in later

END_OF_DOCUMENT_TOKEN_TO_BE_REPLACED

Star Wars is going to make more Star Wars to go with our Star Wars!

31:13 – EA buys Respawn. Will probably kill it like all the others

51:30 – Take-Two and Ubisoft have some very interesting pet names for microtranactions and DLC

57:45 – After a decade and a half, Humvee takes it to Activision for using its product in Call of Duty

END_OF_DOCUMENT_TOKEN_TO_BE_REPLACED

EZK and I start out this week’s podcast talking about comic books, cause why not?  We then continue Kicking the Bucket List, revealing super interesting things about ourselves such as whether we’ve ever been in the back of a police car and which celebrities we’ve met (14:40) and finally discuss how Sega and Capcom earned internet cookies this week by, respectively, not DMCA-ing a fan game and announcing no microtransactions in Resident Evil VII (44:40).

Positive feedback is a wonderful thing but are our expectations of the AAA game industry really so low that we celebrate companies simply for not doing the things we hate?

END_OF_DOCUMENT_TOKEN_TO_BE_REPLACED 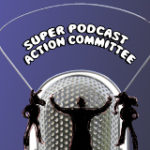 If you missed Saturday’s live broadcast of Super Podcast Action Committee (Episode 156), you can watch the video replay on YouTube or to your left. You can also download it from KNGI.

To keep up with the latest news on the show you can also find us on Facebook, Twitter@SuperPACPodcast and Google +. You can, of course, always find the latest episode on kngi.org. You can send us feedback on the show by dropping a note to superpacpodcast@gmail.com.

Credits: The Super Podcast Action Committee is hosted by E. Zachary Knight and Andrew Eisen, and produced by James Fudge. The show is edited by Andrew Eisen. Music in the show includes “Albino” by Brian Boyko and “Barroom Ballet” by Kevin MacLeod. Both are in the public domain and free to use. ECA bumper created by Andrew Eisen.

Piracy has been considered the bane of game developers for as long as games have existed. Over the years, many methods of fighting piracy or turning those who play for free into paying customers have come and gone. Some methods focused deterring pirates while others instead focused on maximizing profits. One of these profit maximizing endeavors, which recently gained traction with game developers, is the use of micro-transactions — or as they are often called in the mobile world, “in-app purchases.” This method of revenue generation was quickly accepted by many game developers, as it provided a way to distribute the game for free to as many people as possible with the prospect that enough of those free users would then buy in-game items with real money.

Because of this model of doing business, mobile phone producers (mainly Apple) have developed APIs that allow game developers to easily tie their in-game stores to Apple’s payment processing and authentication services. While this method is not without its issues, it has been accepted as a relatively secure method of monetizing a game. That is, until one hacker named Alexey V. Borodin figured out a relatively simple way to spoof the purchases of in game items. Using this exploit, Alexey claims that as many as 30,000 transactions have been made since instructions went live.

In a follow up article, The Next Web reports that Apple has begun efforts to prevent the spread of this exploit. These efforts include blocking the IP address of the server Alexey was using, requesting the server be taken down by the Russian hosting company which owned it, sending take down notices to Youtube over videos providing instructions, and getting PayPal involved in shutting down the account Alexey was using to generate donations (a whopping $6.78 was raised according to that report). Apple also included the following statement:

The security of the App Store is incredibly important to us and the developer community. We take reports of fraudulent activity very seriously and we are investigating.

Even with all these attempts at taking down Alexey’s service, it still remains up and running for all willing iPhone users to take advantage of; that is, if those users are willing to risk their privacy and iTunes accounts to use it, something Alexey claims is not an issue.

While this exploit is very troubling on many levels, it really highlights the folly of relying on security through obscurity. Apple had the chance to secure its APIs long before this exploit happened. It has an opportunity to do so now. In fact, Alexy states that he is more than willing to talk about the issue with Apple. Unfortunately, Apple has not contacted him. While I can understand Apple’s unwillingness to work directly with someone who openly exploits its services, it would be prudent to use all available options to end this exploit.

One would hope that game developers who feel threatened by this exploit will pressure Apple to fix the security issues in its APIs as well as provide some kind of training in best practices in securing in-app purchases. Of course game developers should also be doing their part to use all available tools to protect the integrity of their games as well — something all software developers should do from the beginning.