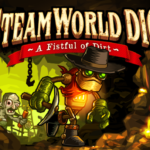 The game opens up as Rusty travels to the mining town to visit his Uncle Joe just to find out that his Uncle is dead, beyond repair. Inheriting his trusty pickax, Rusty must dig through his Uncle’s claim to find out what happened to him. Throughout exploring the mine, Rusty finds ore and minerals that allow him to purchase new equipment and upgrades. Additionally, Rusty stumbles upon mysterious platforms that provide him new powers and abilities that allow him to reach harder to explore areas. Eventually, these new powers allow Rusty to solve the mystery of his Uncle’s death. END_OF_DOCUMENT_TOKEN_TO_BE_REPLACED