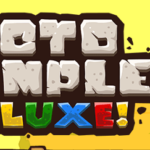 In Toto Temple, 2-4 players enter an arena which has a goat in the middle. Each player then attempts to grab that goat and carry it on their head. The other players then use a dash attack to knock that player down and take the goat for themselves. As the game progresses, powerups appear that grant non-goat holding players special moves and attacks that aid their effort to capture the goat. END_OF_DOCUMENT_TOKEN_TO_BE_REPLACED