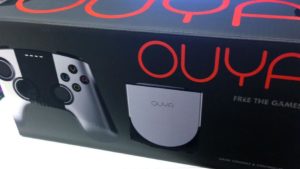 We delivered your OUYAs to our partner in May, and since then they have been in their custody. We paid for shipping, yet the deliveries remain incomplete. We know everyone is getting their OUYA, but it is taking longer than we expected.

We are working hard to get you answers, and more importantly, to fix this. On our end, we have tripled our customer service team so we can respond as quickly as possible to your questions (though the answer may still be that it’s in transit). We are working with our partners to resolve any administrative issues related to undelivered boxes (errors in shipping addresses, customs holds, etc.). I’m told that despite our best efforts, it may take another two weeks or more for some of these units to arrive.

For some backers this may not be enough. Especially when many of them can today drive to their local game retailer and buy one sooner than that. But again, most of these issues are out of their hands. They are on delivery and customs organizations hands. They are the ones that should be getting fan frustration and anger.

But at least everyone will be getting console.

I wouldn’t hold this against the Ouya at all though. This is a brand new company. A startup for all intents and purposes. While I have confidence in the people running the show, there are always setbacks and road blocks that make it difficult to have a smooth go of things. Most of these issues are always out of their hands.

Despite all those problems, I continue to enjoy my gaming experience on the Ouya and spent a few hours on it last night both researching games for reviews as well as just having fun with my wife. I find the console to be very much what I expected it to be and more. I look forward to bringing more reviews of its games in the future. I hope that all of you enjoy it as well.

This is a new kind of console gaming experience. One that you are not going to find through other means. Yes, it deserves to be eyed closely just like any other console or business. However, it has shown that it can provide exactly what it was promising to be. A low cost, open gaming system, with lots of fun games from game developers of all sizes. Enjoy.

Home › Forums › Today Is The Official Release Of The Ouya