Good news for fans of violent games. A large majority of Americans are keen on getting the government out of the business of blocking violent games from being played. You may recall that for many years, various state and the Federal governments had been attempting to regulate violent games in some way. These efforts peaked with the landmark Brown vs EMA Supreme Court case that set the record that video games are protected by the First Amendment.

It seems that all this effort has resulted in a society that is more accepting of violent games than many politicians had hoped. A recent Reason-Rupe poll ask respondents the following question: 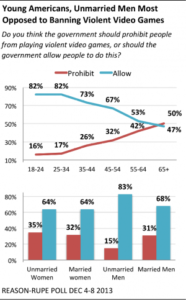 Of those who responded to the question, 66% responded that the government should allow people to play violent video games. Perhaps not surprisingly, the amount of support for violent games corresponds to the respondent’s age. The older the respondent is, the more likely they are to respond that the government should prohibit the play of violent games with 50% of those over 65 supporting prohibition versus 47% opposed.

The amount of time spent playing games also has a strong impact on how a person responds to this question. According to Reason, those who have never played video games are more likely to support prohibition than those who say they play games regularly.

While I do take some issue with the wording of the question, the overall results are hard to get upset about. My specific concern is that the question implies that the government has the authority to prohibit games by default. Rather, as the Supreme Court noted, games of all types are allowed by default unless the government can produce a compelling case for why specific games should be prohibited, something no government has been able to do in regards to game violence.