Amazon is making me feel old 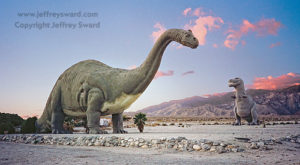 While my sister and I were growing up, our mom often drove us from Phoenix, Arizona to Los Angeles, California to visit our dad.  It’s a boring six to seven-hour drive through the desert with little to do or look at but us kids couldn’t help but get excited to see the dinosaurs at Cabazon, a small town in the middle of nowhere that featured two, towering dinosaur sculptures that served to draw attention to a small, privately-owned restaurant with a big sign that said “EAT.”

We loved those damn dinos.  It was just so cool to see these giant monsters standing out in the middle of the desert.

When we got older, we typically flew out to see our dad so it had been a while since we had made the trek by car.  We were in our early 20s when we decided to make the drive again; just the two of us.  Naturally, we were excited to see the dinosaurs after so long and would be damned if we didn’t stop and say hello!

“There they are!” my sister suddenly exclaimed.

I looked but I didn’t see them and I found that quite confusing because they’re giant dinosaurs standing out in the open; they’re kind of hard to miss.  “Where?” I asked.

Yep.  “Behind the Denny’s.”  The dinos were now hidden behind a commercial restaurant chain and a bunch of other buildings.  The entire area around the sculptures had been paved and landscaped with a bunch of palm trees.  The rex’s tail had been filled in (it used to be a slide.  Granted, it was dangerous as hell!) and a fence had been built around it.

I stopped the car, we got out and I went on a rant pointing at everything that was new and ruining the magic and simplicity of two dinosaurs just standing out in the empty desert.  And then I realized it.  Something that shook me to my very core.

I was old enough to complain about how things didn’t used to be there.

Oh God.  I was getting old.

Which brings us to last night.

If you’ve been listening to our podcast, you know I’ve been singing the praises of the Sega’s Yakuza series for several weeks now.  It’s an amazingly awesome series of stupendously splendiferous games that you absolutely should play and if you don’t like them you have taste in games that differ from my own.

Anyway, I hit up Amazon last night to purchase Yakuza: Dead Souls, a side-entry to the franchise that features the series’ cast of lovable stalwart characters beating back a horde of zombies that have taken over their stomping grounds of Kamurocho.  Reviews aren’t that kind to this oddball entry but I don’t care; I want to try it.  So, I added it to my cart along with a couple other things in order to qualify for free shipping.  And that’s when I learned the horrible truth.

Last February, Amazon had jacked up the free shipping requirement from $35 to $49.

You know, back in my day, gas was under $2, admission tickets to dollar theaters actually cost a dollar, and I could qualify for free shipping at Amazon with a minimum order of a mere $25!

Ugh.  I can’t believe I just said “back in my day.”  You’re making me feel old, Amazon.