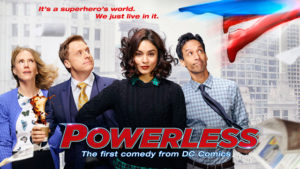 Powerless has several top billing actors on its cast including sci-fi star and legend Alan Tudyk who stars as Bruce Wayne’s lesser known and unloved cousin Van Wayne. Van aspires to work in the Wayne Enterprises home office but feels stuck in the lousy position as head of Wayne Security. His performance in this role of not just reluctant but resentful leader is fun to watch, but the character itself comes off as rote.

Next up is Community star and fan favorite Danny Pudi. He plays Teddy, the head R&D engineer who seems obsessed more with form and aesthetics over function. Fans of Pudi’s Community role of Abad may feel that his talents are severely underused in this role. His acting chops are not used to full effect in this pilot and it feels that he was cast more for his geek cred rather than anything to do with his fit for the roll.

Finally, we have Vanessa Hudgens who stars as Emily Locke, the 6th head of R&D to come to the company that year. She plays the overtly perky, happy and optimistic role who is wowed and awed by life in the big city and superheroes. While everyone else tries to go about their day and ignore the crumbling world around them, she tries to look on the bright side of everything. While this role may be a good fit for her, and to be honest I haven’t watched anything with her in it before, her character is very much a standard trope for this kind of show.

As for the plot of the first episode, it was pretty by the books. Emily arrives on her first day on the job reading Bruce Wayne’s leadership book. She wants to make a difference in the big city and help other people. Everyone that works in the office is already put off her because they either hate her personality or because they know she won’t last long as their boss. Then we learn that Bruce Wayne plans on shutting down Wayne Security and the only way to save the office is to find a hit product that is practical and helpful. Nothing in this episode is really surprising or unexpected. Seriously, it is all by the numbers.

I did get some laughs off. There were several jokes and gags that worked and gave me a chuckle. But based on this first episode, I don’t see myself having any solid belly laughs that I frequently had while watching shows like Community and Better Off Ted. I will watch the next few episodes, but unless something changes dramatically in the formulaic nature of the pilot, I probably won’t stick around too long. For the rest of you, I recommend a wait and see approach to the show.