Why DRM Should Be Outright Banned, Until Then It Should Be Shunned 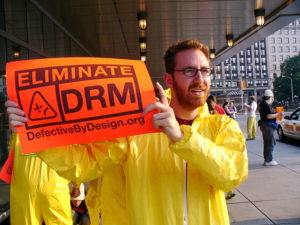 Every 3 years the US enters a period in which consumers and consumer groups get to beg the government for the return of their fair use rights which were stripped with the passage of the DMCA. This year, consumer groups are asking the government for permission to bypass Digital Rights Management (DRM) (That’s the politically correct term) on game consoles and other devices. They are also asking for the right to bypass DRM on DVD movies so that consumers can rip their movies and use the digital files for any reason that would not normally infringe. One thing that often get’s left out of this discussion and process is just why is DRM a part of law.

That is a question that Rick Falkvinge of the Pirate Party asks. In his latest article on the topic, Rick demands that Digital Restriction Mechanisms (The more accurate description) be banned. According to Rick:

Legislation is a matter of pointing at the bad guy in order to slap them in the face. In order to do that, you need to establish who the guy breaking the social contract is.

As the law stands right now, circumvention of DRM is illegal. In other words, it is the people running their own code on their own computers in order to manipulate bits on media they have legitimately bought that are the bad guys. That’s not acceptable and that’s what needs to change.

You don’t establish that by changing the law to say that these people may not be quite so bad after all, maybe we don’t need to be quite so harsh against them. Instead, you do that by establish that they are firmly within their rights, and that another party – the firms robbing citizens and consumers of their legal rights – are the guys breaking the social contract.

He certainly has the picture right. The people who simply want to play their game, watch their movie, listen to their song, or read their ebook are not the bad guy here. The people telling those legal purchasing consumers that they cannot do that unless done in a specific way allowed by the producer are the the ones doing the harm. We have seen over and over again in the games industry just how bad DRM has been for gamers. Just in the last few months to a year, you can find story after story that details the pains that paying customers must go through to play games that are plagued by DRM.

For two recent examples we have the following. Back in February, Ubisoft decided to migrate its DRM servers over the course of a couple of days. Because those servers were taken offline for this process, legal paying customers were unable to play and access games they bought. Such an event would never have happened had Ubisoft not used DRM on its games.

Then we have Blizzard. Blizzard decided that it wanted to control every aspect of the gaming experience of its new Diablo 3 game. The only way it could do this was by forcing every paying customer to always be connected online via DRM. So what happened? The first few days (and still on occasion) gamers could not access the game on a consistant basis, many not being able to play for the first day.

These are just two examples of the horrors of forcing DRM on paying consumers. The internet is rife with complaints about the process. So yes, I do think that Rick is right. DRM should be banned. If it can’t be done by law (which usually follows popular opinion, or money, which ever is more powerful at the time), then it should be shunned by gamers and game developers. We have already seen a number of successes from game developers who have chosen not to release games with DRM.

For example we have CD Projekt, the guys behind the Good Old Games store. They have determined that DRM is futile as a way to stop piracy. Then we have Stardock which realizes that it is more important to maximize profits than to stop piracy. Finally, we have the Humble Indie Bundle. This little promotional tool uses the lack of DRM as one of its primary selling points. Each iteration has been more successful than the last because of it.

If the lack of DRM can be considered a positive by gamers and developers, we should hold equal disdain for games and developers that utilize DRM. Until we can get DRM banned from use in digital offerings, it is important that we shun any developer and any game that utilizes it.

Published in Game Philosophy and Politics and Law