Extended Copyrights In Games Means A Loss Of Culture For Gamers

There is a bit of a hubbub about video games and copyright going on right now. It all started with a post over on Rock Paper Shotgun about why John Walker thought that games need to enter the public domain. He has a lot to say and I recommend reading the whole thing before commenting on anything he has said. The short version is that too many games are lost to time and not available for anyone to purchase. If those games had entered the public domain, they would be more accessible for modern gamers.

Naturally, these comments got a lot of people in the games industry riled up. Not all comments were knee-jerk. There were some thoughtful ones. Particularly a post by Steve Gaynor, one of the Gone Home developers, made some great arguments about how back catalogs of games and other media help fund new works. Another great response was from Paul Taylor, Joint Managing Director of Mode 7 Games. In this one, Paul discussed the public domain and how living creators may feel when their works entered the public domain during their lives.

But I want to look at this in a slightly different direction, that of the game consumer. What does it mean for them if games don’t enter the public domain? First I want to show something that I think many of you may have seen. This is what is called the “Mickey Mouse Curve” of copyright extensions. 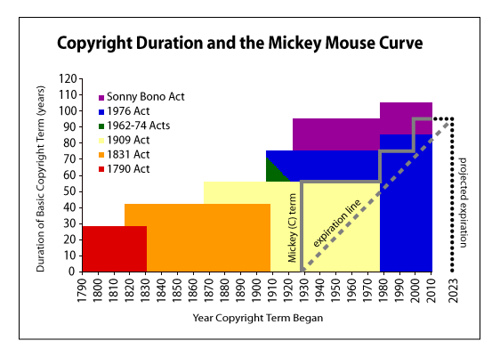 This graph shows the changes in copyright duration throughout US history. In the latter half of the graph, you see a correlation of copyright term extensions and the expiration date of Steamboat Willie’s copyright. Every time Steamboat Willie was about to enter the public domain, Disney lobbied Congress for an extension. It will once again be coming up for expiration in a few years, and we will probably revisit this debate.

What this means for game developers is that we have never lived in a time in which copyrights expired. Books, movies, music and more have all had times when certain works expired, often within the life of the creator. Additionally, before 1976 all works had to be re-registered in order to retain copyright status. However, not all creative works had their copyrights re-registered. This means that while many works continued to be covered by copyrights, many creators felt that some works had moved beyond the need for copyright. To illustrate this point, the following graph shows the percentages of works from various industries that were re-registered. 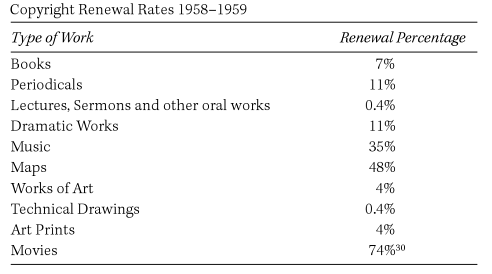 Again, this illustrates a valid point for games. Games have never been in a period of time in which they had to have copyrights re-registered or in which their copyrights expired. If I had to guess how video games might fall into this graph, I would say the re-registration rate of video games would fall into a similar percentage as Movies, at least for the AAA industry.

But really, this is not the meat of my argument, but the build up to it. The real question is how much damage are we doing to culture and gamers by having such long copyright terms? To lead into this, I want to share yet another graph. This one shows the number of books available to modern readers based on the decade the book was published. 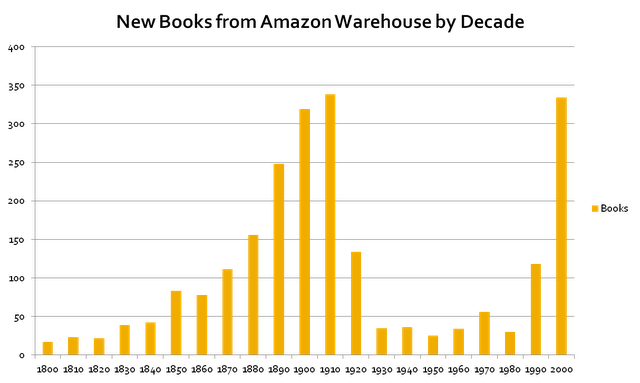 So how does this apply to video games? I can’t say that I have made an extensive study of game availability, but I do want to show some data to help illustrate my point. If I had the time, I could easily expand on the following information, but we will have to make do with this small subset of games.

I took a look at one of the best indicators of older games and their current availability to modern gamers, the Virtual Console by Nintendo. Nintendo has made significant strides to make older games available to modern gamers. However, even their efforts are falling flat.

I looked up the number of published games on various consoles on Wikipedia and pulled together the following graph. This graph shows the number of games originally published for eight classic consoles and the number of those games available on the Wii, Wii U and 3DS virtual consoles.

That is a pretty sad sight to see, to be honest. Of the thousands of games made for those eight consoles, only a very small percentage of them are actually available to modern audiences on modern consoles.

Granted, this graph does not show other legal means that these games are available such as through remakes and re-release discs. But even if I were to take all those other means into account, the numbers would still not reach the full number of games made for those systems.

To further illustrate this, I have compiled a graph showing the number of classic handheld games available on the 3DS eShop.

This graph shows a striking similarity to the one above. Only a small portion of those classic handheld games are available to modern gamers.

However, these graphs only shows the legal means for which those games are available. Emulators are making up the difference at a far faster rate than the actual copyright holders. Of all those games missing from the lists above, nearly all or most likely all of them are available as illegal ROMs. Neither the lack of legal options nor the availability of illegal ROMs are doing the original creators or the games’ publishers any good.

I could compile similar lists for PC, Sega CD, Sega Saturn, Dreamcast, XBox, PS1, PS2 and many more platforms, but that would only show equally disastrous numbers. So the graphs shown above are sufficient to paint a very clear picture of my point. We are losing a lot of gaming culture to the lack of a public domain for video games.

The lack of a public domain for games is hurting the modern gamer by denying them classic games outside of costly and time consuming collecting. Considering the finite number of working cartridges and discs for those games, many gamers are out the ability to play them completely.

How much better would it be for gamers if we didn’t have such a dirth of games. Imagine if we pulled the ROM industry out of the shadows and brought it into the light and allowed those games to be freely and widely distributed. That is the power of the public domain. Instead of having fewer than 10% of games available through legal means, you will have closer to 100% of those games available.

I do want to stress something that John expressed in his article, none of this means that the original creators can’t still make money from these public domain games. Much like with GOG and the Virtual Console, people are more than willing to buy through official channels, especially if those channels promise a higher quality experience. That is one of the major benefits of being the IP holder/original creator, you have built in trust with the consumer.

So my question is this. What would you as a game creator want more, to have your games abandoned to the abyss of time or to have those games available free to gamers who want to play them?