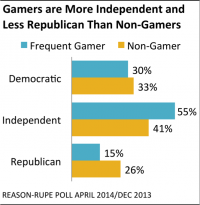 It might not come to a big surprise for many of you, but gamers are less likely to be conservative than non-gamers and more likely to use products and services that many politicians want banned.

The polls also show that gamers support a wide variety of activities and products including buying energy drinks (84%), online gambling (71%), legalizing marijuana (62%) and using Bitcoin (55%). Of all the listed activities on the poll, the only notable exception to this is with 3D printed guns. Only 42% of gamers support the printing of guns at home.