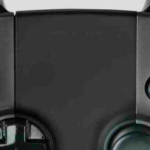 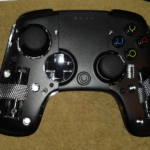 The final uniqueness of the controller is in changing the batteries. The Ouya doesn’t have a rechargeable battery. This was done to keep the cost low. Instead, it uses two AA batteries. However, the battery compartment is not where you might expect. Most electronics will have a battery compartment on the back or bottom. Not true with the Ouya. Instead, you remove the silver faceplates on both sides of the controller. The faceplates are sealed in place via magnets. You pop them off and place one battery in each handle. Very interesting design choice, but one that could possibly extend the controller’s life as battery covers are often the first thing to break on electronics. However, this does mean it will be difficult for third party accessory makes to introduce rechargeable battery packs. Your best bet for a rechargeable experience is to buy reusable AA batteries.

Overall, the controller has a nice weight and balance to it. The buttons, triggers and analog sticks all respond well and feel smooth. I have enjoyed this controller extensively. Compared to my Dualshock 3 and Wii Classic Controller Pro, I like this controller the best. You might find a different opinion, but you will find the experience quite pleasant.

However, this was not always the case. There were a number of problems reported in the early days of backer shipments that may have soured some reports of the Ouya and its controller. The controller I got initially was one of the later revised models and I did not have have any of the issues many people had. The model I have is the one that retail consumers will be getting and they will not have the problems of the early controller.

The first early problem was with lag. People complained that button presses and movements were not being transmitted and received in proper timing. This is a huge problem when it comes to playing many games. If the button presses are not accurate, you will lose. However, this problem has been fixed. While I had not experienced any serious lag, the problem was not related to hardware.  It was a software problem that has been fixed with the latest firmware updates. So if you are running the latest firmware, which you should be as the Ouya requires an update when one is ready, you will be mostly fine. Used both the older model controller and the revised model while running the latest firmware and could tell any difference between the performance of the two. Any further issues you may have will be minor and game specific.

The other major issue that people had was with the O-U-Y-A buttons. Early reports indicated that the buttons were stiff and would often get stuck under the faceplate. Since I had a revised controller, I never had this problem. Once I got a hold of the early controller model, I instantly saw the problem. Take a look at the below picture.

It might not be real clear, but on the left is the older model and on the right is the revised model that I received. If you look at the buttons, you will see that there is nearly no gap between the button and the edge of the faceplate hole in the older model. The holes in the revised model were cut a little over a millimeter wider than before. You can see this more clearly in the next image.

This is the view of the button holes from the underside of the faceplate. The black plastic under cover has the same size holes in both pictures, but you can see that there is less faceplate overlap in the revised model. One final picture will give you a better idea of why this made a world of difference.

There is a quick fix for this problem. You can file out the button holes so that they are wider than they are currently. I plan on using a rounded chainsaw sharpening tool but I have read that you can also use course sandpaper to get the job done. That would take care of the high resistance if you don’t want to work with Ouya support to get a replacement faceplate. The controller itself is fine, the problem is just with the faceplate.

So that is the Ouya controller. It had some early issues that frustrated backers, but these are issues that are not present in the retail controller. So feel confident that you will be getting a quality controller if you are buying it now. My next experiment will be in using it with my Android phone and PC. We will see how that goes.