The game is won when any player reaches the required number of points in the match and does so in two rounds. Points are scored based on the time holding the goat and coins collected. The coins combined with the goat holding ensures that any player has a chance to win.

But like any multiplayer game, the real fun is in the powerups. Aside from the common dash attack, players can gain the advantage through a number of unlocked abilities. These include a larger head which grants a bigger attack area, a freeze bomb, a tiki mask that seeks out the goat bearer and more. Each one provides a chance to turn the tides of the game to that player’s favor. They are all well designed and fun to use. 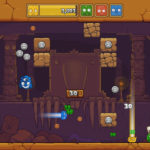 Next is the variety of the arenas. There are a number of arenas available to those who unlock the full game. The locked game contains only a single arena. Each arena has different characteristics that change up the way the game is played. In one arena, the room is filled with blocks that must be dash attacked to break before anyone can get the goat. Another is an under water room that provides a change up of the game’s normal physics. Others include areas of the room that randomly close up to prevent players from gaining access to certain parts for short periods of time. Each room combined with the various powerups provides a unique playing experience every time.

The art of the game is very well done and resembles the style of art Juicy Beast is known for. Each player character, while having the same profile, has a unique face that gives them a personality of their own. The backdrops and platforms in each arena are cleverly designed and animated to look alive and sometimes foreboding. None of this work gets lost to the player even when the action gets heavy.

But aside from all that, the real test of a great multiplayer game is in the reaction of those who play it. I first downloaded the game when I was home alone. I got to play around with the training modes but was not able to experience the full game. When my family came home later that week, we got to try it out together. We had a blast. We loved every minute of the game.

My kids gained a real fondness for the underwater arena. They loved that the goat bearer was tucked inside a transparent blowfish.  My wife and I found that the mine, the room filled with breakable blocks, was a real fun room. The ability to just smash stuff provided a visceral feel that the other arenas couldn’t match.

Since then, my kids ask to play the game pretty much every time I turn on the Ouya when they are around. It has become a family favorite along side Towerfall. So I definitely recommend buying Toto Temple. If you are a fan of local multiplayer games or just want something to play when you have company over, you will be pleased with this purchase.

What you get for free: The first temple arena

What you unlock for paying: All Temple Arenas