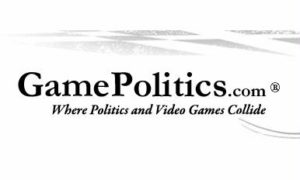 Andrew Eisen shared his experience with getting started on GP and interacting with Jack Thompson.

I was fascinated by this guy.  I had never seen an adult act like that and I started reading the actual articles at GamePolitics so I’d know what he was talking about.  Very quickly I found myself a regular reader of the site and knew I’d remain one even if Thompson took his shenanigans elsewhere.  I found the site’s coverage of the political side of video games unique and fascinating.  After a few months, I was emailing Dennis McCauley, the site’s founder and managing editor, whenever I found a story I thought his site should cover.  I also emailed him to point out the occasional typo.

I shared some thoughts about the purpose of GamePolitics and how those two topics will continue to collide, but in a much better way.

Yet, gaming and politics will continue to collide. It won’t be like before with politicians trying to restrict or ban games. It won’t be about trying to claim that games are causing violence in our youth. No. It will be about people who play games openly becoming our leaders, our congresspersons, even our President.

Gaming is a common hobby now. According to the statistics from the ESA’s Essential Facts report, nearly half of all Americans play games. The same is probably true for nearly all countries that have a gaming presence. The average age of gamers is 35 with with the average number of years of gaming among them 13 years. The average age of the game purchaser is only 2 years older. Adult women now make up a larger portion of the gaming audience than young boys. This shows that the generation that is coming into leadership roles throughout the world are familiar and comfortable with gaming.

Finally, James shared a bit of GP’s history with the group GamerGate.

Well, in the last two years or so, an ongoing culture war between so-called “gamers,” or “GamerGaters,” or “men’s rights activists” (depending on whom you ask), and so-called “social justice warriors,” or “feminists” seemed to force people to take sides.

Contrary to what anyone wants to say or believe, GamePolitics did its best to cover it from every angle, often taking heat from both sides, and in the very beginning of the movement, becoming a target for my interactions on the GameJournosPros mailing list (you can read all about that here). I don’t regret being a part of that list, but I was not happy that GamePolitics got dragged into the mix.

In the end, we all said our good byes.

This isn’t the end of it all though. From time to time, James, Andrew and myself will be writing here. It won’t be the structured political content of GamePolitics. Instead, we will be writing more about what we want to say about any topic we want. You can expect from me pretty much what I have already written. Andrew’s content will probably reflect that found on his YouTube channel. As for James, I can’t speak for him, but he plans on being really into Dark Souls 3.

Also along for the ride are many of the GamePolitics readers. We welcome them all here. We haven’t made any promises about what to expect here, but we hope you enjoy it.