‘Uncensored’ should be a baseline expectation, not a special feature 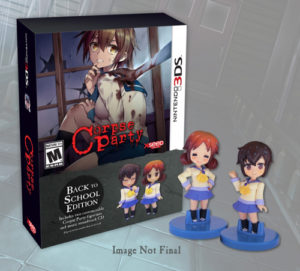 The lengthy post mostly concerns itself with assuring readers that the game is arriving in the west completely uncensored.

“All versions of Corpse Party released by XSEED Games are presented to you with no content removed or altered whatsoever (save for the small handful of sniggly things we had to change for legal reasons, like a Nokia ringtone). The ESRB M rating exists for a reason, after all, and our M rating for Corpse Party 3DS has already been secured.”

That’s a superb sentiment that I think we can all get behind and while it’s genuinely awesome that inclined gamers will be able to play the game without any of its content removed or altered from the Japanese release, it’s kinda sad that we’re living in a time where “uncensored” has become a bullet-point instead of a given.

Imagine if the advertisement for the Jurassic World Blu-Ray proudly boasted “Includes ALL 124 dino-riffic minutes you saw in the theater!”  Well yeah, it damn well better, right?  It’s like public facilities that prominently advertise “clean restrooms.”  That shouldn’t be a privileged feature that only the best toilets enjoy, it should be the minimum acceptable standard.

While Nintendo and other publishers continue to make nonsensical cuts and alterations to the localized versions of their games, it’s indeed wonderful that XSEED is doing right by its fans but I hesitate to praise anyone simply for meeting what I consider to be a bare minimum expectation.

That’s not asking too much, is it?

Corpse Party is currently available on PSP and PC.  It will launch on the 3DS in North America sometime this summer.