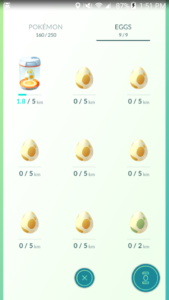 The big problem, as I recently learned, is that eggs are locked into hatching specific pokemon when you receive them from Pokestops. So that big list of nine 5k eggs are only going to give you Gen 1 pokemon. You won’t get a chance of hatching Gen 2 babies until you burn through your existing eggs and replace them. There is no way to get rid of eggs except by hatching them.

There is a really easy fix for this that I think Niantic should do. Change the behavior of eggs to where they pick the pokemon that hatches from them when you start incubating the eggs. This way, existing players aren’t punished for having a full slate of eggs when this update dropped.

That’s it for today’s Quick Thought.