Ouya Park: Open To All [UPDATED] 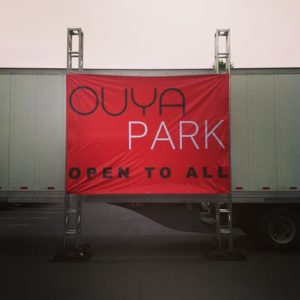 Update: Looks like the ESA is not happy with the Ouya’s unconventional use of the E3 convention’s locale. First they rented adjoining spaces to the Ouya and parked semi trucks in them to block the view of the event from the street. Then they called the cops when Ouya rented the spaces outside that and placed banners all over it. ESA, what are you afraid of here? Now back to the original article.

While all the big console companies are putting on extravagant shows or large direct streams of their latest and greatest, there is one event that it taking place outside the normal E3 channels. Ouya, the little console that could rake in over $8 million at Kickstarter, is holding its very own show in a parking lot not far from all the primary E3 locales. This Ouya Park is a very open and very casual event to show off the Ouya console to anyone who wants to learn more or just show their love for it.

This is one console that is flying under the radar thanks to the big blunders of the XBone and its massive beat down by the PS4. Even the humble Wii U is flying high above it. But don’t count this console out.

I wrote up a fairly extensive first look at the console over at Divine Knight Gaming. I must say, this console has the potential to not just supplement your gaming habit, but fulfil it as well. You know all those indie games that Sony and Nintendo were showing off? Many of those could be made for this console under far simpler and far fairer terms. In fact there are already a number of great looking indie games for it.

There is a full list of the current crop of games over at Ouya.tv. I would like to highlight a few that I have found rather fun.

Saturday Morning RPG is a great little RPG from Mighty Rabbit Studios. These guys held a successful Kickstarter and are releasing this throwback to classic 1980s tv tropes in episodic form. Battle villain spoofs from He-man, GI JOE, and Smurfs through this clever and funny game.

A Bit Of A Fist Of Awesome by I Fight Bears, takes place in a world in which the time stream has been corrupted and animals have taken over. The only person who can save the world is a lumberjack with a talking, powerful fist of awesome. This side scrolling beat ’em up takes you back to days of playing Double Dragon or Bayou Billy. This game was also another successful Kickstarter.

Knightmare Tower by Jelly Beast Studio is a great game. You play as a knight with the mission to fly to the top of a tower, rescuing princesses and defeating monsters along the way. You start off launching in a rocket and then eject to freefall/leap to the top of the tower. You climb upwards by attacking enemies which then launches you further up the tower.

These are just a handful of games that are currently available. While some are not as great as others, there is plenty here to love and more are being added to the library every day.

So while Sony, Microsoft and Nintendo are getting treated to wide fanfare, don’t over look this great console. You will not be disappointed in buying it.