Imagination Is The Only Escape Fighting Censors With Crowdfunding

Seems like it was just yesterday that I was thinking of this game. Oh wait. It was just yesterday. I mentioned Imagination Is The Only Escape as an example of a game idea that was killed due to publishers who were unable to deal with mature themes in games. The publishers which had initially considered the game thought that the holocaust theme was just too touchy of a subject to allow in a game.

Sure it is fine to shoot Nazi soldiers all day long, but show World War 2 through the eyes of one of the millions of victims of the holocaust and suddenly you have a controversial game on your hands. That is a lousy way to advance an art form.

Lucky for us though, the recent wave of crowdfunding has allowed for controversial games to find a way to the public. That is what Imagination Is The Only Escape creator Luc Bernard has done. He has launched an IndieGoGo campaign to bring that original vision to life.  He has done this in spite of the publishers who wouldn’t touch the game with a ten foot pole. 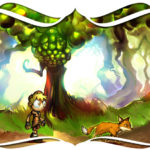 Movies and television shows have been vehicles of thought-provoking historical fiction for decades. Meanwhile, the vast majority of video games about real events have focused on action-packed battle scenes and military strategy. Imagination is the Only Escape will be the first game to focus on the human element of one of the world’s worst atrocities: the Holocaust.

Understanding the mental toll the Holocaust took on the victims — especially children — is pivotal in a global society. As the main character, Samuel, users will have somewhat of a front-row seat into the horror of the Nazi Army’s occupation of Paris and persecution of Jewish families.

This is pretty exciting to see that Luc is able to use these tools to bring this game to life. I remember reading about his difficulties in trying to bring the game to the DS back in 2008. I remember being disappointed in the publishers at that time. The fact that we still have publishers unwilling to deal with serious subject matters in games is sad reality. One would think that a medium that wishes to be taken serious by the public would be more than willing to show a bit of seriousness in its design.

Hopefully, Imagination can get the funding it needs. Luc is asking for $125,000 and is using the flexible funding model. So every pledge will go toward making this game a reality. I think that no subject matter is off limits to games and support the efforts of game developers to stand up and defend their art from would be critics and censors.

We certainly need more designers like Luc and more games like Imagination. I look forward to seeing this game made, its message spread and the industry grow because of its inspiration.