Happy Public Domain Day Everyone Outside The US! 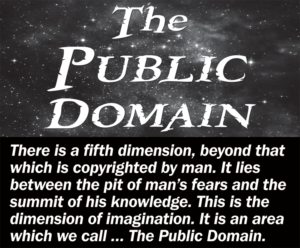 For all of us in the United States, January 1st is just New Year’s day. The day the calendar ticks another year. But for people who live outside the US in Canada, Europe and elsewhere, January 1st means something else entirely. It means today is the day that new works enter the Public Domain. This is the day that more of our culture becomes free to distribute, free to build upon , and free to do whatever we want with. Yet, because of terrible copyright laws in the US, we miss out on all this.

Prior to 1978, copyrights lasted only 28 years, with the option to renew them a single time for an additional 28 years. Then in 1978, Congress, under the guidance of companies such as Disney, extended copyrights to last the life of the author plus 50 years. That is what the rest of the world has today. But in 1998, Congress once again, at the bidding of companies like Disney, extend copyrights to last life plus 70 years for human authors and 95 years for corporate owned copyrights. This pushed the US out of line with much of the world and works in the US won’t start entering the Public Domain until 2019.

Each year, Duke Law School’s Center for the Study of the Public Domain writes up an article talking about all this and then lists a bunch of stuff that could be entering the public domain if copyright terms had been left untouched in 1978. Some of their examples include Green Eggs and Ham and One Fish, Two Fish by Dr. Seuss, To Kill A Mockingbird by Harper Lee, Hitchcock’s Psycho, Ocean’s 11, Spartacus, and many more books, movies, tv shows and music.

Video games are in an unique area of copyright. There has never been a time in which video games have ever been in the public domain. Even the earliest video games had their copyright terms automatically extended to their current terms. The earliest known game, Tennis For Two, won’t enter the public domain until 2053. This copyright situation for games has left this industry in kind of a bind when it comes to preservation of our history.

Had copyright terms not been extended in 1978, we could theoretically see quite a few popular games from the Atari and the NES and other early game systems enter the public domain today. Taking a look at games published in 1988, we see the following games that could have entered the public domain.

Of course that is not a complete list but only a list of some of the more common games of that year. You must also take into account that many games were developed by companies still in existence and many of those companies would have renewed the copyrights to the second 28 years. However, there are many games from that year and earlier that would have gone unrenewed due to a variety of reasons.

Now, if you want things to get really interesting, back when US copyright law was originally formed, copyrights were only for 14 years with the ability to renew them for an additional 14 years. Had that stayed in place til today, we could be seeing many games from 2002 entering the public domain. This includes such titles as:

For now, the best we can do is keep an eye on Congress and watch for any bills introduced in the next couple of years to extend copyright terms once again. Coming in 2019, we will start seeing works from 1923 enter the pubic domain and many movie studios, including Disney, won’t be too happy about that and will likely try to get Congress to extend copyright once again. We should also be talking with our Congressional representatives and Senators about changing copyright law to reflect the spirit of the Constitution’s clause that copyright terms be for a “limited time.”

Published in Game Controversies and Politics and Law