The game itself is rather simple. You control a spaceship. You job is to navigate from “moon” to “moon” rescuing stranded astronauts. You also must avoid getting hit by asteroids. Hitting one kills you and you must start the entire game over again. There are no extra lives. Upon rescuing all the astronauts in a single level, you are taken to the next level with more astronauts and more asteroids. So the challenge is ramped up every time you succeed. 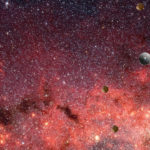 The game isn’t too difficult. You are allowed to sit on any moon you land on and wait for the best time to launch and seek out the next. You cannot be harmed by asteroids while sitting there, but you also can’t rescue any other astronauts. Objects that float off the edge of the screen will reappear on the opposite side of the screen, just like in classic Asteroids. So it is often best to simply wait until the next moon is within a straight shot from your current position with no obstacles in the way.

There is no paid version of this game. You get the whole ting for free, but Noah does ask for a $5 donation if you like the game. There is nothing special about this donation. It is just pocket money for him as far as I can tell. But if any donations go toward fueling his drive to make games, then it is worth every penny.

What you get for free: The full game.

What you unlock for paying: The satisfaction of knowing that you helped an 8 year-old realize his dream.

Verdict: Pay the kid and help fuel a future in game design.