I played through the three free single player campaign levels and found them to be a great introduction to the core game. The campaign had me invading a compound and trying to disable various power sources. The levels were guarded by a number of robotic dogs, flying drones and ceiling mounted turrets. These provided a pretty good challenge without being over powering. I look forward to completing the campaign and trying out the local co-op. 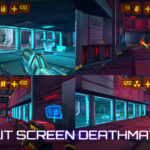 But like any good arena shooter, the real meat is in the multiplayer. Neon Shadow offers two ways to get your game on. The first is the online multiplayer. There is only one free level to play in and I explored it the best I could. Unfortunately, there were no other players online when I tried it out, but I did get the chance to sample the available weaponry in the game. I really wish that there were more people online or at least some bots to fill the ranks so that people playing could get that experience.

But that is not the only place to play multiplayer. The unlocked version of the game offers the ability to hold split-screen deathmatches for up to 4 payers. This is something that many modern FPSs are lacking. Since the most recent generation of consoles focused so much on online play, they neglected, for the most part, the local multiplayer aspect of gaming. I am glad to see a solid game like Neon Shadow try to bring that back.

Over all, the game is pretty solid and fun. The animations are pretty fluid, although the 2D animated cutscenes are a bit jarring after playing in the 3D arenas. The weapons are fun to use and the control scheme is pretty straight forward. I really think this game is well worth buying, If only to pad out the online deathmatches so I have people to play with. However, I think that any FPS fan could have plenty of fun inside Neon Shadow.

What you get for free: Three single player levels, one online multiplayer level