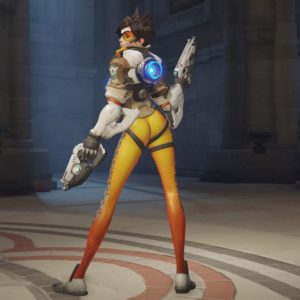 See the lady in the yellow pants to the left?  That’s Tracer from Blizzard’s upcoming game Overwatch.  According to game director Jeff Kaplan, the creative team wasn’t “entirely happy with [that] pose” so late last month, the devs at Blizzard replaced it with the one they feel “speaks more to the character of Tracer.”

You can find Tracer’s new pose below the break. 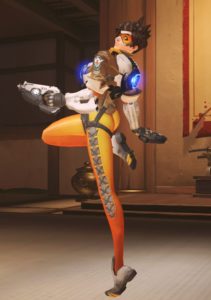 There it is over on the right.  Personally, I feel it’s a much more dynamic and interesting pose and speaks more to the personality of the character than the fairly pedestrian “over-the-shoulder” pose of the original.  So good job, Blizzard.  Kudos!

Of course, that doesn’t mean there’s nothing to critique; let’s talk about Tracer’s butt!

Tracer has, as game dev Brianna Wu put it, “a ridiculously deep butt crack.”  It’s true!  Her pants are a texture applied to her 3D model, acting more like body paint than actual fabric.  This is why her butt appears to be devouring the seat of her pants.

Well, typically, tight-fitting active-wear like what she’s wearing stretches across your butt, it doesn’t crawl up it (if it did, Tracer would likely be rocking some major camel toe).  That’s not to say tight clothing won’t show off your curves; it will!  Want to see what Tracer’s outfit might look like if it were a bit more accurate to real life? 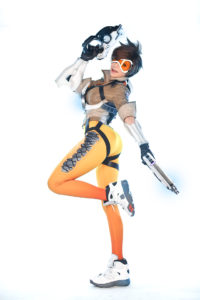 Ladies and gentlemen, I present to you, cosplayer extraordinaire, Tasha!  Look at her butt.  LOOK AT IT!!!

That is a lot more typical of what a butt looks like in tight pants.  They give an impression of one’s backside, not a topographical map.  You can tell that a butt exists.  You can discern its shape.  You can even see a definite separation of the cheeks but you don’t see a valley-like crack running from perineum to coccyx because molding to every available square inch of your tush is not normally how such pants work.

Overwatch releases in a month so it’s a bit late in the game to make Tracer’s rump look right (unless “wedge-tastic” is what Blizzard was going for in the first place, in which case, mission accomplished!) but there is something else it might be able to change before launch and that is Tracer’s Subway sandwich thigh.

Look at how Tracer’s leg is tucked up under her in the picture at the above right.  That’s not natural.  Don’t believe me?  Try it yourself!  Stand up and make like a flamingo.

Can’t do it, can you?  Now look at Tasha’s cosplay pic.  That’s what a human being’s leg looks like in that pose. 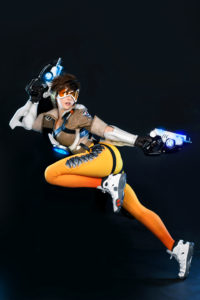 “But what about the pose on the right?” you might ask, noting that a human cosplayer managed to tuck her leg under herself in a seemingly impossible way.

Scroll down and check out the behind-the-scenes pic underneath.  She’s actually sitting on her leg in order to mimic the pose from this Tracer figurine.  While it’s too late for the figurine (it shipped over a year ago), reposing Tracer’s in-game model probably wouldn’t be that much of a headache if Blizzard were so inclined.  Of course, Tracer is a cartoon character and if the exaggerated positioning of her leg is what the creators wanted, well hey, good on them!

So what should Blizzard do in the future?

Whatever the heck it wants! 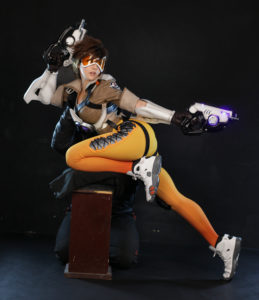 However, if it takes a step back from Overwatch and decides it wants tight pants and poses to be a bit more accurate to real life, here are my suggestions: