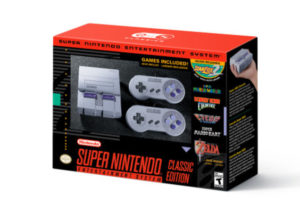 Of course you want to know what games will be coming to the system. Here is the list:

While this list if very different from mine and Andrew’s lists, it does have some crossover. However, the biggest surprise on the list is the previously unreleased Star Fox 2.

From a personal perspective, I am really pleased to see the inclusion of Super Mario RPG, Final Fantasy 3 (instead of 2), and Mega Man X. The fact that the console comes with 4 classic and excellent RPGs is great news as well. For many people, this will be their first time playing them.

For those out there who want to see a little competition in the predictions Andrew and I made here we go:

Our readers collectively scored 15, of the predictions we published. You guys are good.

The only thing I am wary of with this news is the lack of information on controller cord length. My hope is that Nintendo learned from the NES Classic and the controllers have cords that are at least 8 feet in length, or to include wireless controllers. This is Nintendo, however, and the likelihood of them learning is pretty low.

The other important lesson is to make enough of these to supply the demand. Nintendo failed to do this with the NES Classic. Thankfully Nintendo has confirmed that they are going to make way more of these than the NES counterpart, but they are still mum on the exact numbers. They have also confirmed that this is a limited edition device and won’t be in production after the initial 2017 run.

So make sure you get out to the store early on September 29 if you want one of these at MSRP. If you wait too long, you will likely miss out if you aren’t willing to pay triple to a scalper.