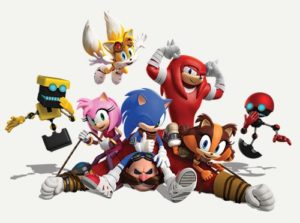 Remember when Sega was yanking gameplay videos of Shining Force off of YouTube?  Even videos where fans were merely discussing the game were getting flagged for copyright violations.

Well, it seems like Sega has come a long way in the last few years regarding YouTube copyright claims as it has decided to exercise an amazing amount of tact while simultaneously making entirely reasonable claims.It seems some YouTubers are uploading entire episodes of Sega’s Sonic Boom TV show.  That is a clear violation of Sega’s copyright and the company would be well within its rights to issue DMCA takedowns which would place a copyright strike on the channels in question.  But that’s not what Sega’s doing.

“We’re not the kind of bullies that want to have your accounts damaged or your rings stolen just because you like the Sonic series,” reads a post on Sega’s blog.  “In the short term, we’ll be sending some letters to people who have uploaded full episodes of Sonic Boom TV Show content, so that they can remove them without needing to worry about getting a copyright strike on their account. Users who don’t remove them on their own will have them taken down.”

“We think the stuff you guys do is awesome, and we thank you for your understanding and continued support. It’s also important to note that this applies specifically to the Sonic Boom TV show. If you guys have any other questions, please do let us know. Thanks very much!”

An interesting approach and one that fans seem to appreciate if the comments are anything to go by:

While fans seem impressed with Sega’s actions, many are wondering how the heck they’re supposed to watch the show if the episodes are removed from YouTube.

Sega responded saying that while episodes won’t be available on its YouTube channel, “Sonic Boom episodes are (and will continue to be) available streaming through other sources. You can actually watch them right now on Cartoon Network’s website: http://www.cartoonnetwork.com/video/sonic-boom/episodes/index.html”  It also hints that there may be Sonic Boom DVD news soon.

It also clarified that using clips of the show for parody purposes would “probably be fine” but if there was an issue, Sega would send a letter before making a claim or issuing a takedown.

Very cool Sega, very cool.  I guess Sega really does DO what NintenDON’T.