Nimble Quest is a snake game with RPG elements mixed in. In classic snake, you had to guide a growing snake around the play area, gobbling up food and growing each time you did. If you ran into yourself or the edge of the screen, you lost. Nimble Quest is very similar, but instead of a snake, you are a party of heroes with various abilities and strengths. Instead of eating food, you fight monsters. Instead of growing when eating food, you add additional heroes to your line as you advance. Everything else is the same. 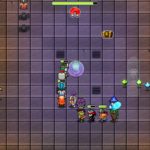 The game play is not all that clever or engaging. You spend the majority of your time just avoiding walls and monsters. There are some stats leveling you can do for your various unlocked heroes, but for the most part, you won’ be doing much character building. Since you only have real control over the lead character, you can’t really advance a party of your own design. It is all based on random chance. So you may spend a lot of effort to level up a group of heroes, but end up not getting many of them when you play.

The primary thing going for the game is its look. It has a nice cartoonish design that portrays the non-serious nature of the game. It is cute and fun to look at, but that is all surface. There is no depth of gameplay to draw you in past the visuals.

Then we get to trying to buy the game. Let’s say you actually like the game and want to buy it. How would you do that? A lot of Ouya games, at least the good ones, have a buy option right there at the title screen. Others have it in the pause menu or always hovering on most menu screens. Nimble Quest doesn’t do anything like this. Maybe I missed it because the game doesn’t respect TV safe zones and I have a crappy tv that overscans, but the only way to get an option to pay is to run out of your daily play session allotment. Even then it is difficult to actually choose the pay option.

Overall, the game has some heart to it, but its heart is more suited to phones and other small portables, not a TV. In fact, the game is also available for those devices. But when it comes to Ouya gaming on a TV with a gamepad, Nimble Quest falls flat. In the end, using Nimble Quest’s sales numbers as a reason to avoid the Ouya doesn’t cut it. Instead, it is a warning about what happens when you release a subpar game.

What you get for free: Limited number of daily play sessions

What you unlock for paying: Unlimited play session